In this tutorial I will demonstrate how to make a county level choropleth with a custom colorbar using Python and Plotly. Much of the material in this tutorial can be found in Plotly’s County Level Choropleth in Python tutorial, with the notable difference being that this tutorial will use a custom colorscale to indicate population of each county. Please see the tutorial linked above on downloading Plotly and getting a Mapbox Access Token.

I will be using Colorado’s county population data for this tutorial. This data that I will be using has been generously provided by Colorado’s state government and can be downloaded from here. The website that provides the geojson files with county geolocation data is CivicDashboards, and the specific colorado county geolocation dataset can be downloaded from here.

First begin by importing the python libraries you will need. note: I am importing os here because I have my Mapbox Access Token saved in my .bash_profile, it may not be neccessary for you to do this.

Next I will read in the data. I will be using pandas for handling data in this tutorial.

You should now have a dataframe, full_df, that looks something like this:

Now you should have a df_2015 dataframe that will look like this:

Once I have my dictionary of geolocation data in order, I want to make it into a pandas series to make it easy to join to my population dataframe

finally I join the geolocation data to the population dataframe

At this point I need to figure out the colors I will use. Ideally, I would like a pretty diverse scale to really show the differences between the populations for each county. To do this, I use Chroma.js Color Scale to get a hundred separate color values in the shades that I want, so that I can have a separate shade for each 10,000 people in a county. Also, I will need 101 colors to make it easy to map the colors on a scale from 0 to 1 for Plotly’s colorbar feature, so I just repeat the last item of the list twice. I than zip the list into a dictionary

Now that I have my color dictionary scl, I can map the colors to the population in a new color column on my df_2015 dataframe. I first write a function to do this and than apply it to the dataframe.

At this point we can start getting data together for the plotly diagram. With county level data in plotly and mapbox, the county geolocations and colors are plotted as layers using a list of dictionaries inside the layout dictionary object, of which I will go into more detail in a moment. Let’s make our layers list.

So for each county in the df_2015 dataframe we append a dictionary to our list of layers, layers_ls, that says the source type (geojson), the source (our geolocations for each individual county), the type (fill to fill in the color), and the color to fill it with.

let’s also go ahead and make a variable with our mapbox access token. Since mine is saved in my .bash_profile, I access it as such:

Plotly works largely with dictionaries and Plotly subclass dictionaries from the graph_objects module nested within each other. The documentation for these objects can be found here.

Before we can make our data dictionary though, we must have out colorscale in the right format. Right now we have our colors saved into our scl dictionary, but to make a custom colorscale, they must be in a list. The first item of the list needs to be a sublist that looks something like [0, '#fffddb'] and the last item should look something like [[1, '#8b0000']. It is really important that the first sublist start with 0 and the last sublist start with 1. If they do not, your colorscale won’t show up, and plotly will display its own standard colorscale in its place. I use my original color list colors to make my new colorscale list.

Next I will make my data dictionary using graph_objects dictionary subclass go.Data. Since you don’t actually want your markers to show up, you only need them there to put in a colorscale, just put them at a random latitude and longitude that won’t show up in your image. I use lat:0 lon:0 which is somewhere in central west Africa. the marker dict is the most important part here. cmax is how highest value the scale on your colorbar will show, and cmin is lowest. color is where you define the range between cmax and cmin. colorscale is where you put your colorscale list. Make sure showscale is True and autocolorscale is False. For colorbar use a go.ColorBar dictionary subclass where you can adjust the length of your colorscale with len. You can also set a title and do other things here. Unfortunately, the title and colorbar layout aren’t as customizable as I would like so I’m not using a lot of the features here. See the documentation for more info.

Next I make my layout dictionary using the graph_objects dictionary subclass go.Layout(). Play around with the height, width and zoom, as well as the lat and lon in the center dictionary of the mapbox dictionary to get your plot viewing correctly. I have things set here to view Colorado well.

Finally I can build the figure saving it where you like. Again you may want to play around with the width and height variables.

Now my image is saved in the location I specified [current directory]/image/test.jpeg. If you followed with this tutorial exactly, this should be your result: 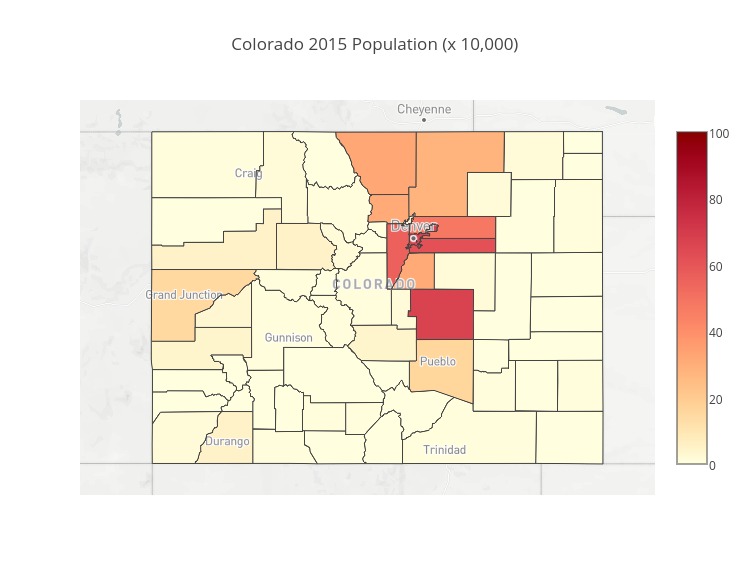